This is my first blogged movie review. “All is Lost” was nominated for an Academy Award, and stars Robert Redford. This movie is about a man whose sailing boat/yacht is struck and damaged by a shipping container. The movie has no dialogue and is one long effort to survive.

The movie did not blow me away with a great film experience, but, by the next morning, as I thought about the movie, a strong spiritual theme emerged. The movie was a parable of Christian being saved by God experience. It was all there, in the right order, and everything! I was surprised. 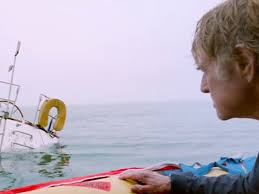 If you think of the boat as the man’s life, it is damaged. He tries to patch it–the patch holds for a while. He signals for help with flares, and each time, the passing ship…passes him by. He uses alcohol. His ship is sinking. There is no way to fix it by himself. He gets in a lifeboat. He sets his own lifeboat on fire (by mistake) and it sinks.

The man is in the water, not treading very hard. He goes under. A hand reaches down and drags him to the surface, saving him.

That’s just how it works. We are sinking in sin (and can’t save ourselves no matter how we try), God drags us to himself and graciously saves us.

It doesn’t appear by all interviews, reviews, and accounts of this movie being made that this was an intended picture of Christian salvation, but it really plays out that way.